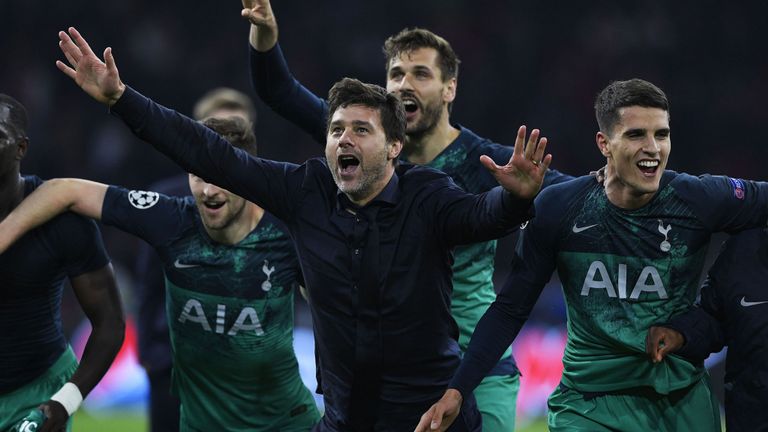 Tottenham manager, Mauricio Pochettino, has emotionally hailed his side for reaching the Champions League final after a thrilling 3-2 win at Ajax.

Tottenham were defeated 1-0 in London in the first leg of the semi-final leaving them with a mountain to climb against the Dutch giants.

Ajax scored more two goals in the first half of the second leg to stand at 3-0 on aggregate.

However a hattrick from Lucas Moura ensured that Tottenham beat the Dutch side 3-2 to go through on away goal rule.

“I told you, in the last year I am telling everyone that we have a group of players who are heroes. They showed it today. Second half was amazing. Thank you. Thank you football.

“This type of emotional without football it is impossible to live. I am so emotional now. Thank you to our fans. Thank you to people who believed in us from the beginning of the season to achieve this moment.

“I think it’s fantastic. Difficult to describe in words all that we are living now.

“We were talking before the game, in the meeting, when you work, when you feel the love, it is not a stress. It is a passion. The emotion that we showed today was the passion to love this sport that is football.

“The game against Manchester City and today, it is amazing. The fans, the people from Ajax and from Tottenham, they showed their love towards this type of game. For us it was so tough.

“To compete at this level in this magic competition, for this situation to happen, I am so lucky to be a coach, to be in football, to live this moment.

“Superhero. They are all heroes but he [Lucas Moura] is a superhero. Unbelievable hattrick. He deserved it. A great guy. I’ve seen everyone, from the first to the last one, in this club, for all the tough moments that we are living in the fifth.”

Champions League: Lucas Moura reveals who made him score 3 goals in Tottenham 3-2 win at Amsterdam