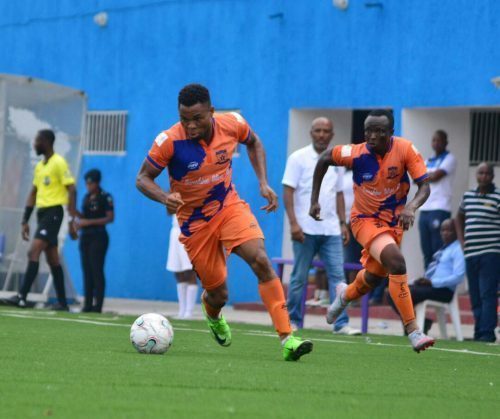 Sunshine Stars Football Club of Akure on Sunday defeated Niger Tornadoes FC of Minna 1-0 in the match day 19 of the Nigeria Professional Football League, NPFL at the Akure Township Stadium.

With both teams putting up relentless efforts in the first half of the match, Sunshine Stars were the better side as they consistently pressurized the visiting team in their half.

After the teams failed to convert their opportunities in the first half, Chibundu Omaka who came in for Abiodun Joseph in the 47th minute netted in the cross from Fuad Ekelojuoti in the 60th minute into the second half to put the Owena Whales ahead.

The lone goal was enough to secure the maximum three points for the Sunshine Stars just as the visitors failed to move out of the relegation zone.

Speaking after the match, Head Coach of Niger Tornadoes, Hamza Abara described the match as fair and balance.

He added that his boys top notch display in the game was due to the sacking of the club’s management committee which he said had been hindering the performance of the club.

“Our plan was to pick three points here to escape relegation, but it turned the other way round.

“Hopefully, we will get something out from our away match with Enyimba in our next game.

“The problem of the team used to be the Management Committee, they are the architects of the team, but they are no longer with the team. As you can see the performance of the boys has changed.

On the part of Sunshine Stars’ Technical Adviser, Kabir Dogo, he posited that, “I’m very happy, very exited. at least we were able to secure the needed three points.

“I believe the type of officiating we’re getting here is what we have been getting in other places, I know by now we should at the top of the league.

“We are going for double away in our next two matches, our plan is to get four points in both matches if we get this kind of officiating,” Dogo said.

NPFL 2019: Yobe Stars on the verge of relegation after losing to Akwa Utd