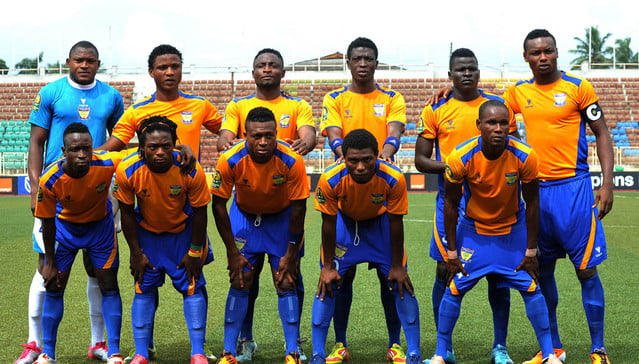 Sunshine Stars of Akure on Sunday defeated visiting Wikki Tourist Football Club of Bauchi 2 – 1 in the match day 17 of the Nigeria Professional Football League, NPFL at the Akure Township Stadium.

It was a tension-soaked match as the visiting team fought relentlessly till the last minute of the match.

But the home team grabbed the needed three points after failing to utilize the many chances of the first half.

Franklin Sasere who just secured a deal with Lugano FC of Switzerland and Anthony Omaka, scored Sunshine Stars’ goals in the 14th and 29th minutes of the match.

Sasere had got his goal from the goalkeeping error of the visiting team’s goalie while midfield dynamo, Omaka met an incisive Adeniji’s cross with a perfect touch in front of goal.

However, the never tired Wikki Tourist was able to secure its lone goal through Abah Umar in the last touch of 45th minute of the game.

At the second half of the match, both teams struggled to convert their chances with Wikki Tourist players dazzling the home team with pass accuracy in front of the home fans.

Reacting, the Assistant Technical Adviser of Sunshine Stars, Yusuf Saliu commended the efforts of his boys for getting the 3 points for the club which is now 6th on the league table.

According to him, the tactics deployed on the field of play was what was agreed upon in the dressing room.

Saliu expressed optimism that the team will get the desired result in the their next match with Remo Stars.

“We actually prepared for this match, though this wasn’t the result we expected, we planned to beat them like 4-0, as you can see in the first half we had like five chances.

“Just because our boys are not just disciplined in front of goals. We give glory to God for the three points.

“We are still on course, we still put our mind to play in the super six. We are going to Remo with full force, hopefully we will get three points from there.”

For the head coach of Wikki Tourist, Aliu Subair, he described the effort of his team as laudable.

“I believe they tried considering the fact that we had a long journey, it wasn’t easy,” he said.

He further emphasized that, “the officiating was perfect, Nigerian referee are doing very well, infact, today I told my players not to challenge any of the referee decisions. They are human beings.

“Why do you want them to be perfect, there can not be perfect human being. So the officiating was excellent.

“There is no compromise, we are going to get our three points at home in our next game,” he stated.